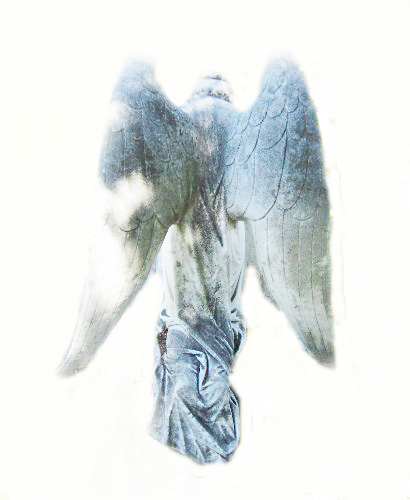 This is a novel that is dear to my heart. It is a story of a girl who is suffering from panic-anxiety disorder and agoraphobia - an emotional illness that makes people afraid to leave the safety of their own homes. It is an illness that can be utterly terrifying and devastating, but it is also very treatable, and one that can be overcome with the right help - so that the sufferer can learn to have a full and happy life again.


Originally published by Kids Can Press, you can buy paperback and hardcover books at Amazon.

It is also available on Kindle (USA, Canada and other countries!) and Kobo (Canada) now. All e-rights are owned by Margaret Buffie.  To connect to Kindle and Kobo to order this book or browse my other books ebook info, please click on the My E-BOOKS tab on this site. 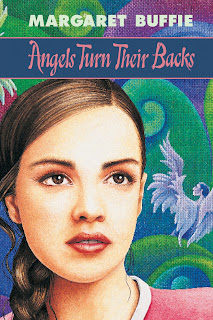 Fifteen year old Addy was once smart, funny and loves to laugh. She did well in school and adored reading, old movies and needlework. But suddenly her parents split up and Addy and her mother move away from Toronto to Winnipeg, leaving behind Addy's school, her father, and the one real friend Addy thought she had.

Even when she was a kid, Addy tended to be fearful at times, but now she is falling apart. She is afraid of taking even one step out of the apartment she and her mom are renting in an old house in Winnipeg. She can't make it into the school without terrible panic attacks. And it's worse than that. She can't hear people when they're right in front of her, yet she hears voices that no one else can in the rooms of the old house. Addy feels as if she's falling apart. Where can she turn? She wishes she was back at her old school, but she knows there's no going back. The trouble is, she can't move forward.

The world has become hostile - and the only safe place seems to be her apartment in that ramshackle Winnipeg house, despite the voices.

Addy is terrified. Will she ever be able to find her way back to a normal world?


Characters:
One of my favorite characters in this story is Victor: an African Gray Parrot. Touchy, loud, secretive, funny, smart, magical, annoying and lovable. But can he keep a secret? 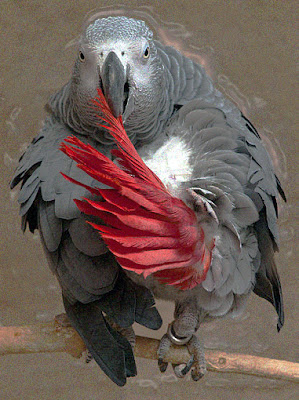 Because needlework plays a large part int his ghostly story, here are some pieces of a young person I know who suffered from agoraphobia in her teens. Needlework focused her mind and helped her get through many tough times. The work is exquisite and she continues many years later, and her own young daughter is also interested in working with different forms of art now! 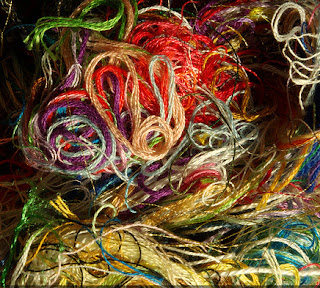 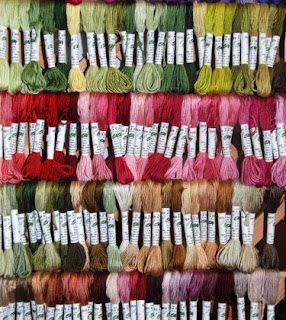 The next four photos are parts of an Sampler Tapestry 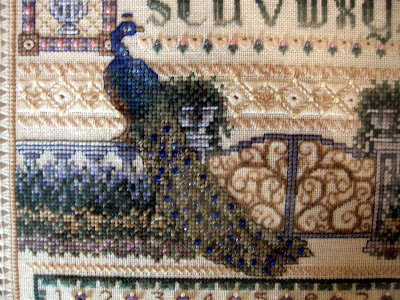 Work by C. A. MCGregor

The peacock's tail has pearls and dark blue beads attached to  it. 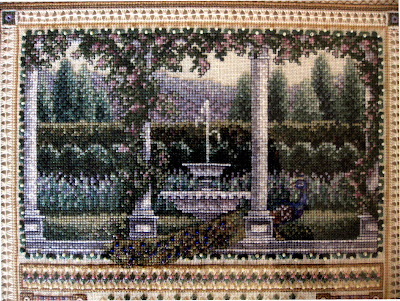 Open cut-work can be seen closer in the border if you click on the tapestry.
Work by C. A. MCGregor 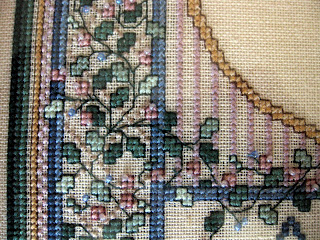 Tiny coloured beads added to the design.
Work by C. A. MCGregor 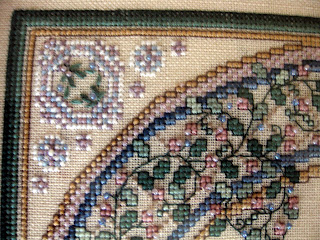 This beautiful peacock needlepoint was made as a wedding gift 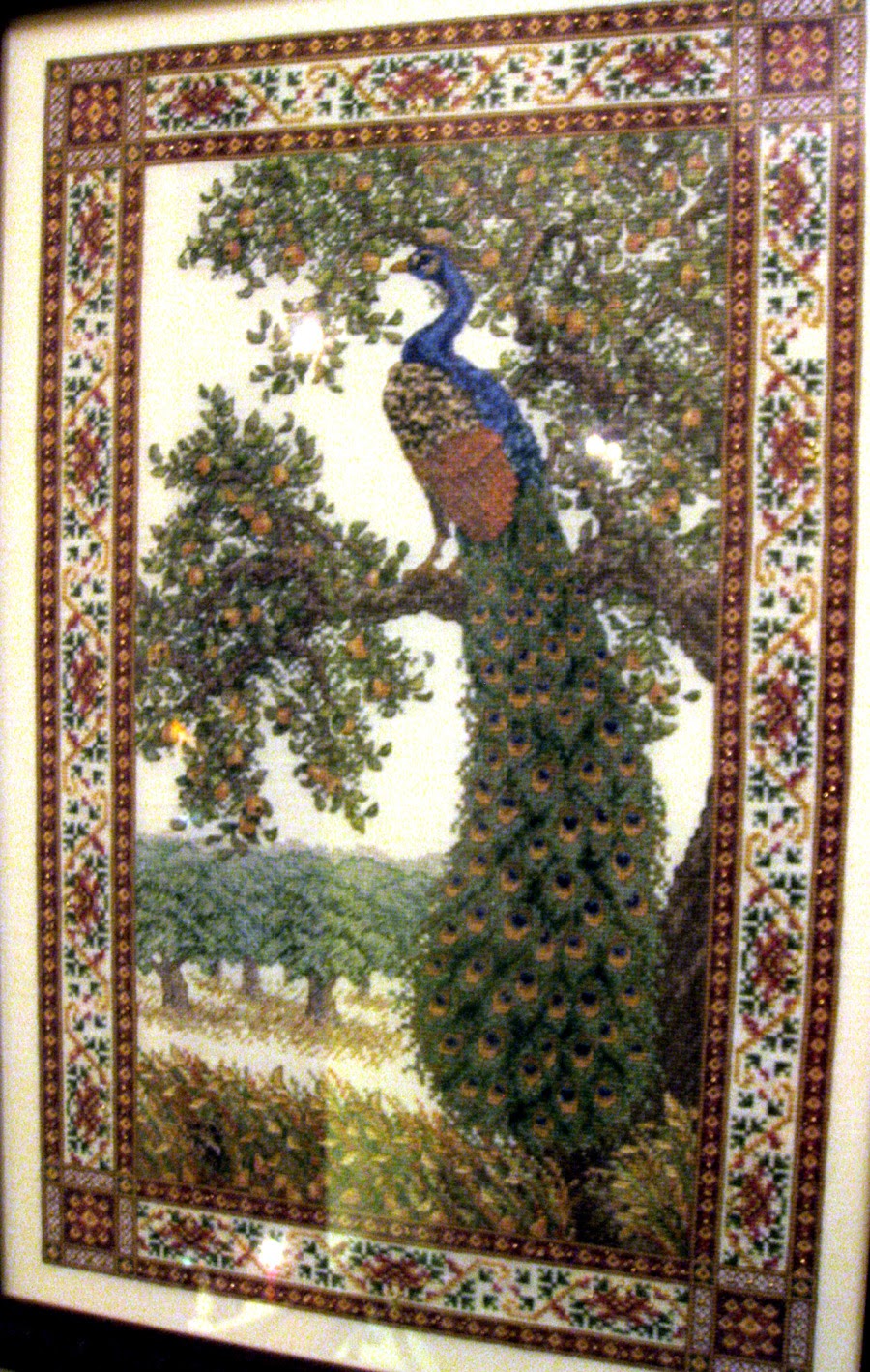 The Wedding Gift
Work by C. A. McGregor 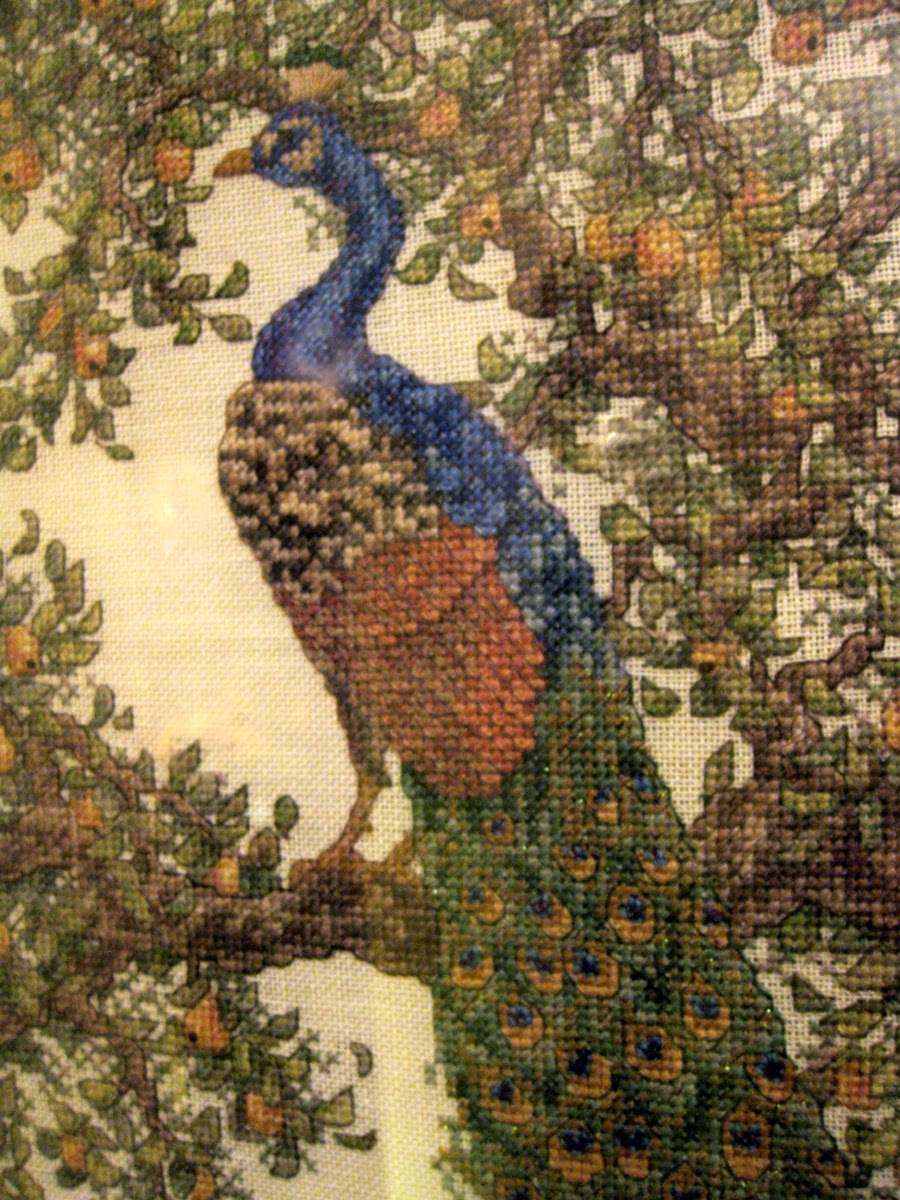 Close up of The Wedding Gift
Work by C. A. McGregor 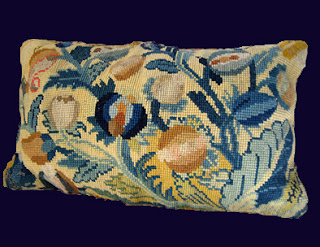 A few excerpts from reviews for Angels Turn Their Backs


REVIEW: When I was a young teenager in the sixties, I was always frustrated to find that any ghost I might encounter in a book would eventually be explained away as part of a dream or perhaps just a transparent curtain billowing in the wind on a gloomy night. Young readers today need no longer face that disappointment. Since Margaret Buffie’s first novel came out in 1987, her many fans have been able to rely on her for complex, interesting stories in which the ghosts are psychologically satisfying and entirely plausible in context....(Angels Turn Their Backs) is a gripping, intelligent novel and Buffie’s readers will likely be willing to follow her in this new direction for the sheer enjoyment of reading her excellent prose and getting to know her original, thoroughly modern characters. Books in Canada


REVIEW: "Angels Turn Their Backs" is a wonderful book. (It) is superior especially for teens who have problems about fear and parents splitting up. Margaret Buffie uses the characters to the fullest extent in the story .Everyone can relate to the emotions, the actions taken in the story and cherish the story more for what it stands for and delight in the similarities found in their lives. Daily American


REVIEW: Margaret Buffie plunges us deep into her heroine’s first full-fledged crippling panic attack. ...You’re on the edge for this kid from the word go. Using the immediacy of first-person narration, Addy’s panic is beautifully realized.... The story is peopled with likeably flawed major and minor characters. It will certainly satisfy Buffie Fans. Quill and Quire


REVIEW: ...The author masterfully weaves diverse elements into a flowing and believable first person narrative, leaving the reader feeling that one has discovered a special friend. NAPRA


REVIEW: Buffie’s preoccupation with things heard but not seen, seen but not heard, is not absent in this very readable, psychologically acute novel. The Globe and Mail


REVIEW: Buffie has written a wonderful book about a girl caught up in agoraphobia. This novel is a must read! Simcoe Times Reformer 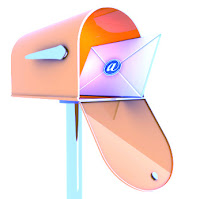 
5 STARS FOR YOU! I chose to read one of your marvelous books, called "Angels Turn Their Backs" and I loved it. One of my favorite things about the story was when you talked about Addy, it was like you were talking about my life. The last paragraph really got to me. That was the dream, Addy was falling off a building and flying like an angel. My favorite part of the book was when Addy first met Victor and Victor said, "Hey Baby", and afterwards he said, "Creepy Crawly Josh. Creepy crawlies. Poor little Victor Boy. Poor little orphan Vic-toir. Please ... sir ... may I have more?" That was funny. I actually laughed out loud in class while everyone was reading! A Reader from Toronto


I really enjoyed your book "Angels Turn Their Backs" and couldn't put it down. I felt sorry for Addy, first she thought she was going crazy because she couldn't go outside, then she is afraid to trust anybody because she thinks her best friend has turned her back on her.... you made me feel what it was like to be afraid to go outside. This is a very scary experience. A Reader from Ontario


I just finished reading your book, "Angels Turn Their Backs", which I got for my sixteenth birthday. I would just love to say how fantastic it was. It held my attention all the way through (in fact, I couldn't put it down and finished it in two days!)...the "adventures", so to speak, in your novels are exciting. I love your work! Thank you! From a Fan - Sarah


Dear Ms. Buffie: I read "When Angels Turn Their Backs" in two days. I couldn't put it down! It was by far the most compelling book I have ever read. I am 15 years old and I live in New York. I am suffering from Panic Disorder with Agoraphobia. It is a intricate battle to fight. I really understood the main character's feelings and truly empathized with her. I could never envision that an author could put down those horrid fears in such a plausible way on paper. You really motivate me because I hope to become a writer myself someday. I am presently writing a novel which is based on my life. Through my work, I hope to get the stigma attached with mental illness to dissipate during time like I believe you did. It is hard to find people who really recognize and sympathize with the heart of agoraphobia. It is one of the most strenuous things to live with and distinguish. I also want to thank you for making me feel like I am not alone. After I read your book, I felt like I had someone with me to say "You know one step at a time is okay." That is really a good thing to feel. Thank you so much, you are a brilliant author and a true inspiration to me. Jeanette from New York


Fortunately, I had a chance to read "Angels Turn Their Backs". It is a very well written book. I really enjoyed reading it! It must have taken you a long time to research agoraphobia and to learn all it. How did you get the idea to write a book about this? ... I learned a lot ... I actually had never heard of such a thing before I read your novel. I had also never heard of panic attacks either and find it hard to believe that they are real and people actually have to encounter them dozens of times a day. That's terrible! I really had fun reading "Angels Turn Their Backs" because I leanred a lot and I now have a better awareness of this disease and what it is. Susan M.


Thank you sooo much for sharing your stories with me and the world. And inspiring me to write as well. "Angels Turn Their Backs" was the book that helped me most, what with my social anxiety. For a long time i wondered why it was so hard for me to be out in public when there were a lot of people. Breaking into cold sweats and having to repeat the words "in and out" to remind myself how to breath while my heart beat fast. Eventually there were few places that i felt comfortable and safe going to. The library being one of those places. And thats where i discovered "Angels Turn Their Backs". It helped me to realize and conquer my problems and fears. It even inspired me to write a poem with the same name. Sincerely and with much love, Kristie N.

This is such an amazing book. I have read it so many times my book has actually fallen apart and I have been desperately trying to find a copy in a book store in Winnipeg. It is one of my all time favorite books. The way you write is just so captivating that once you start reading, you can't put it down. I can't wait for when I do find a copy, and I can read the book to my daughter. Being from Winnipeg myself really made this story more real for me as I read it and tried to picture where it was taking place. Words cannot truly describe how much I love this book. When I was in my teens I spent most of my time reading as I didn't have much for friends, and Angels Turn Their Backs was always my go to book. I just wanted to say thank you for writing such an amazingly captivating book.