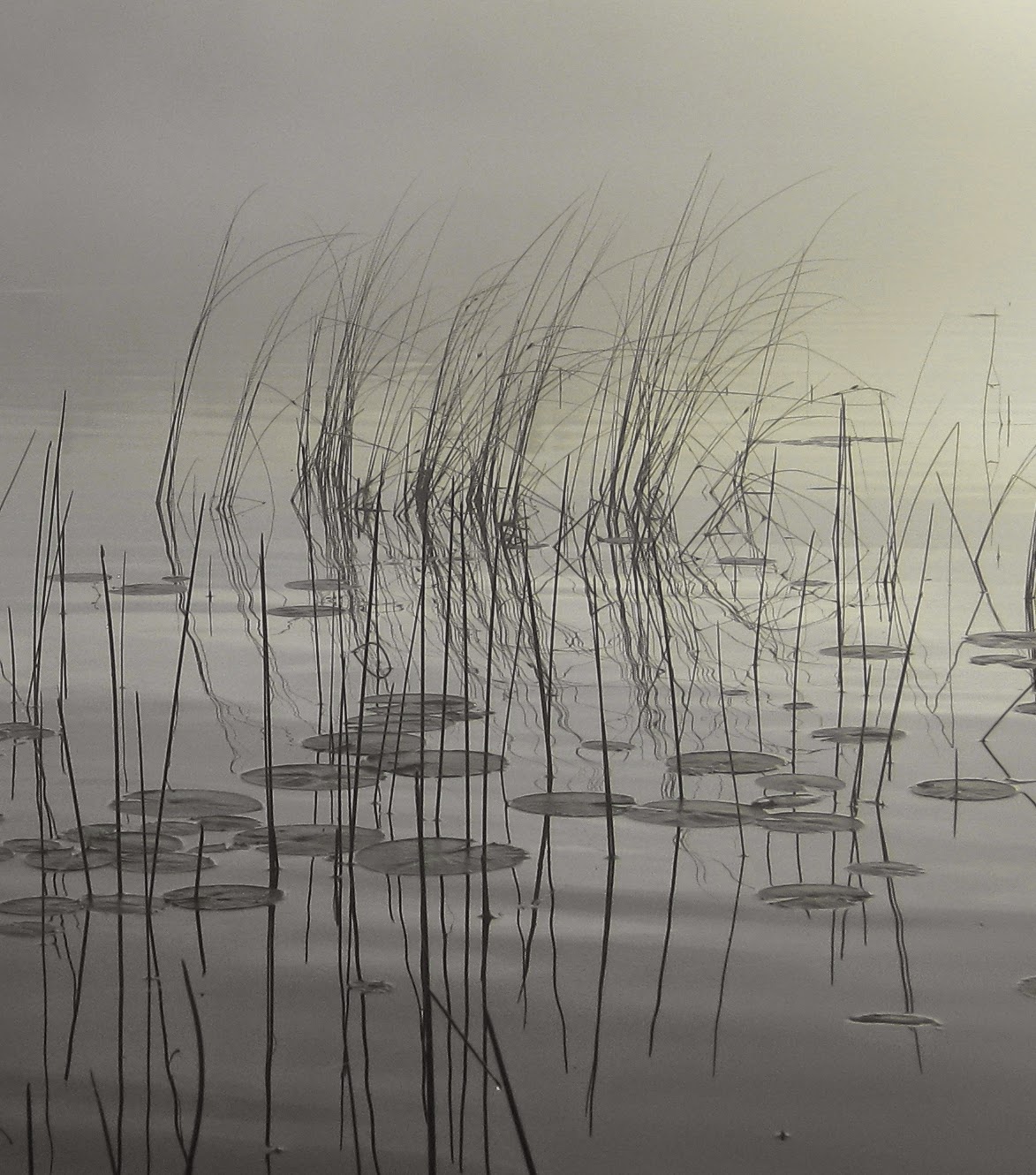 It is almost time to return to the lake. In Manitoba we never refer to any lake by name unless giving directions to it. No ... if someone asks me, "When are you going to the lake this summer?", they are referring specifically to my lake -- the long narrow waterway in Northwestern Ontario that breaks into two wide bays like the head of a double hammer. I live on one of those far quiet bays every summer. This is the same bay where my grandfather pitched tents with his wife and family in 1918 - and with like-minded friends from the railway  -built a beautiful log cabin using the pine and spruce that grew on his property.

My parents moved across the bay from my grandparents and built their own log cabin - their three small daughters (at the time) in tow. My father was a young German from the North End of Winnipeg and he was taught the art of cabin building from my English grandfather.

Lake time was a time for coming together as a family. And for me it was a time to be vigorous and useful  by helping in my own small way to clear land and to help strip the rough sticky bark from the spruce and pine logs that would eventually become our three-room cabin.

It was there that my own fragile and uneasy self began to set sturdy roots deep into the peat-sandy ground. A place where I felt safe. Free. Happy. I could breathe there. I could fish with my father in the old flat bottom boat. I could canoe by myself, under the watchful eye of my parents, until it was time to float around the bay on my own. It was a secret world. A magical healing world; separate from the bustle and stress of school, the city, and all the anxieties a young introvert like myself drifted through all winter long, in a watchful, absorbing way.

My Manitoba prairie roots grew much slower and really deepened when I started researching my father's German Galician family, and understood the many complex and deep struggles of their immigrant lives in Manitoba. I am an unabashed Manitoban, too!

As each year went by, my lake roots grew deeper - as did my father's. Sadly and most grievously,  my dad died from cancer when I was twelve and my mother took over the care of our cabin, as well making sure we spent as much time there as possible. Her roots also went deep, as she grew up in my grandparent's cottage until she married. Those were tough years without our dad, but all four girls (we had another sister by then) never missed one summer at the the lake. And we still don't.

We also don't have a road onto our lake land. When I was first married we cross country skied in in the winter. But it was hard going and the old cabin was not insulated. My husband was a teacher - so we finally decided as we got older that we would keep our lake time to two months every summer including most weekends until freeze-up. Together we built our own cottage on the property. Meanwhile, all winter long, I could and can still only dream of the cabin, sitting under layers of snow waiting for me.

In a few weeks I will be back again. To the quiet solitude of time alone, as well as time shared with my own family. But as soon as I walk the paths behind our cottage, my roots will dive deep again. Walking around the lake, and into the forest I will take my camera and my eyes and learn so many more secrets of the boreal forest. In my canoe, in the as I paddle each misty morning and quiet evening through the bays and the islands and marshes, I will heal, and change and become me again - gliding on Earth's eye. 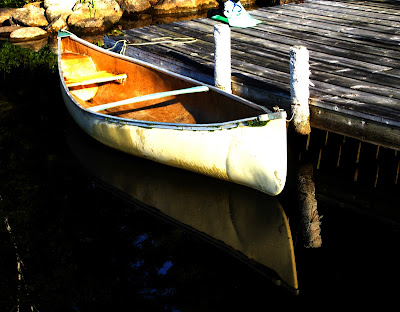 "In spring of youth it was my lot
To haunt of the wide world a spot
The which I could not love the less -
So lovely was the loneliness
Of a wild lake, with black rock bound,
And the tall pines that towered around." 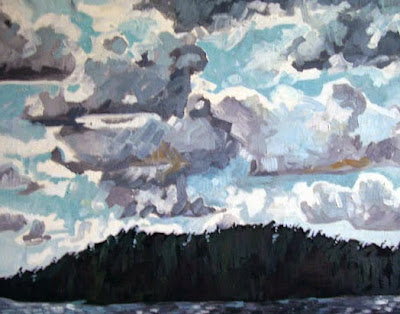 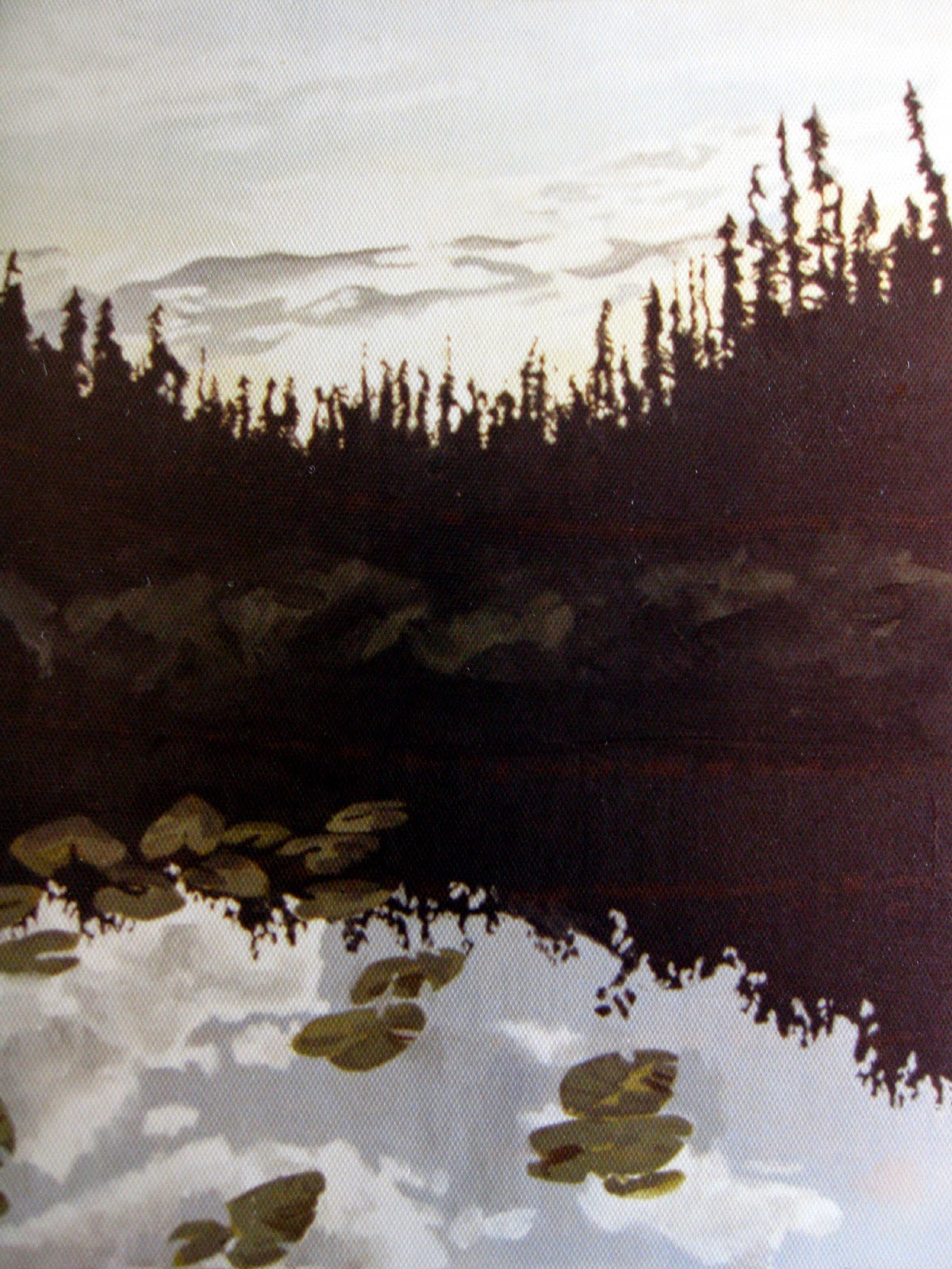 The Marsh at Twilight, Oil on canvas, © Margaret Buffie


"The white heat pales the skies from side to side;
But in still lakes and rivers, cool, content,
Like starry blooms on a new firmament,
White lilies float and regally abide."
Helen Hunt Jackson 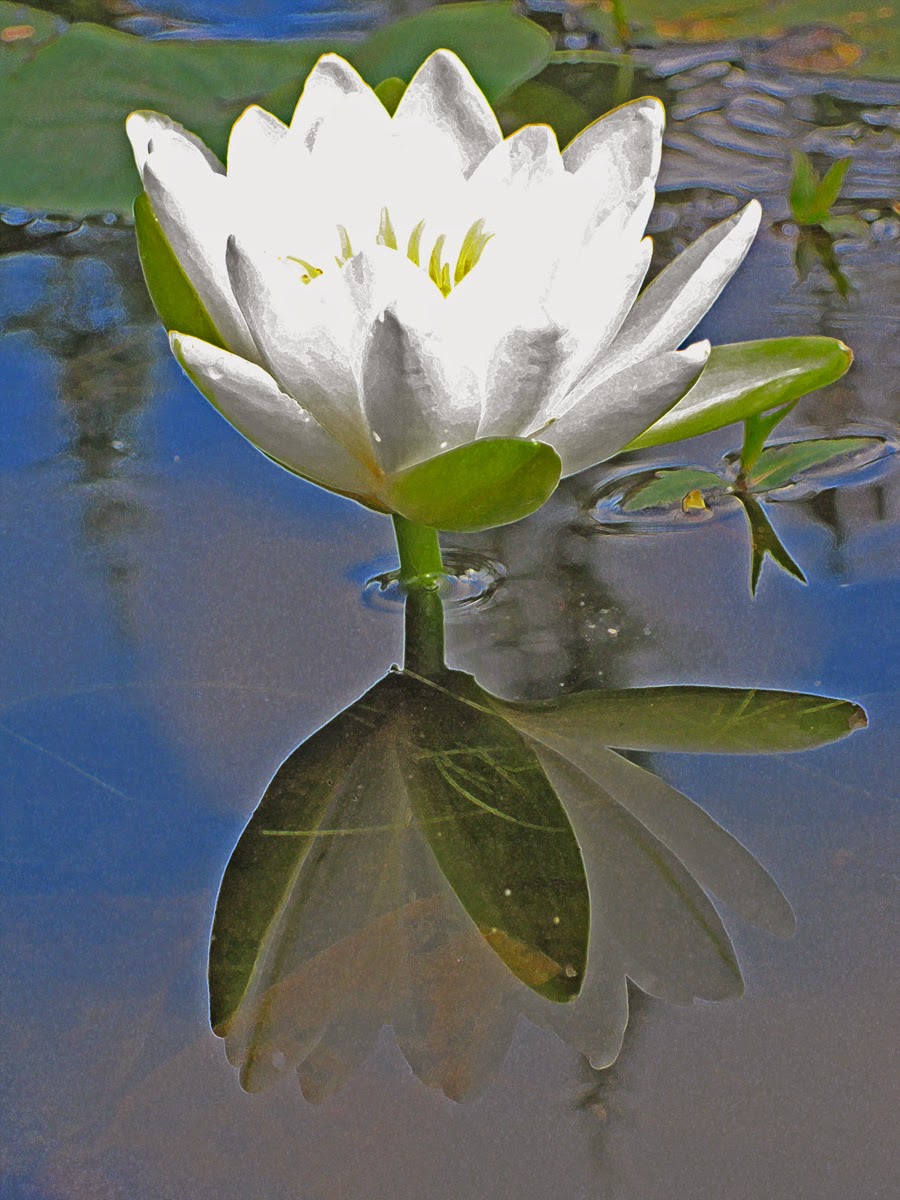 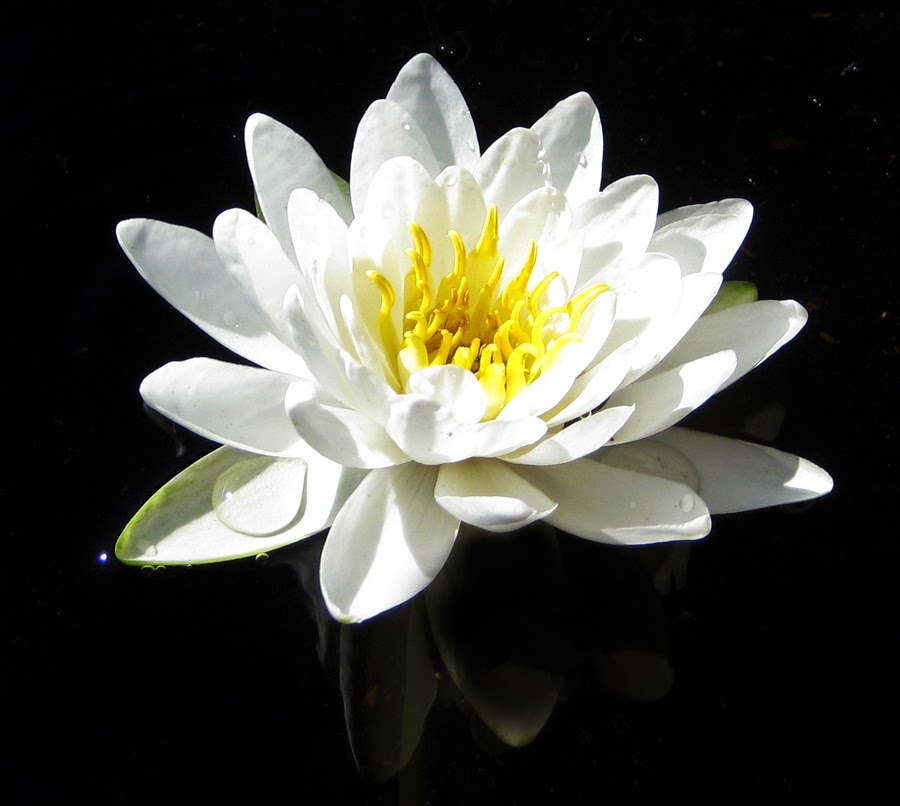 "If there is magic on this planet, it is contained in water."
Loren Eiseley 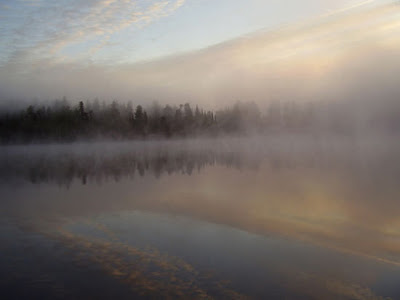 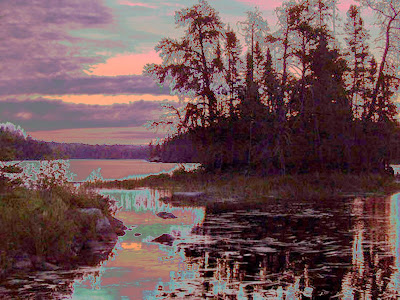 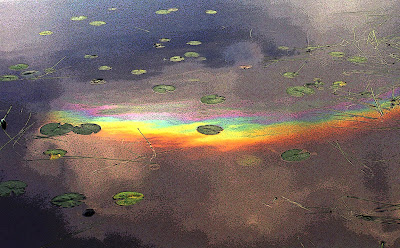 "Nothing is more memorable than a smell. One scent can be
unexpected, momentary and fleeting, yet conjure up a
childhood summer beside a lake… "
Diane Ackerman 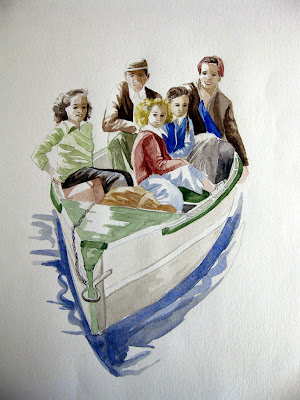 "A lake carries you into recesses of
feeling otherwise impenetrable."
William Wordsworth

Note from Margaret: Across from our property is a high bank of rock. When the water was low last year, this beautiful form appeared combining rock and water to create a beautiful arrowhead.

Slopping Rock (below) is called this by our family because when waves hit against it, you can hear the slop and slap of the waves echo across the bay. 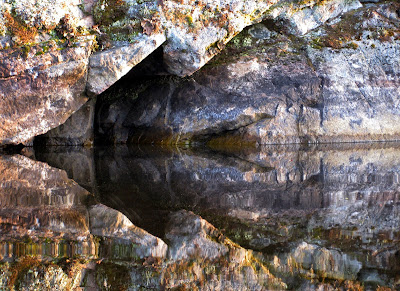 "A lake is the landscape’s most beautiful and expressive feature. It is earth’s eye; looking into which the beholder measures the depth of his own nature." Henry David Thoreau 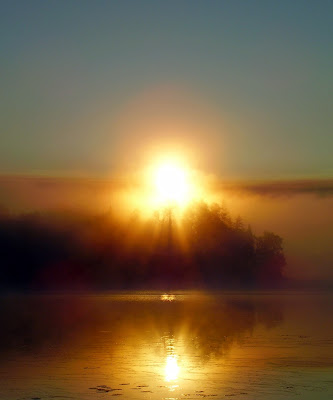 Trees Giving Thanks for Another Sunrise Photo © Margaret Buffie 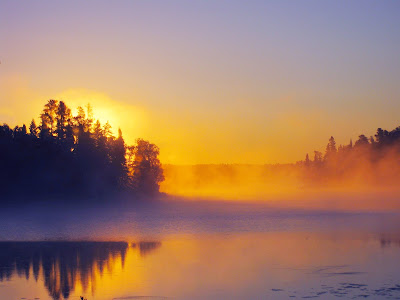 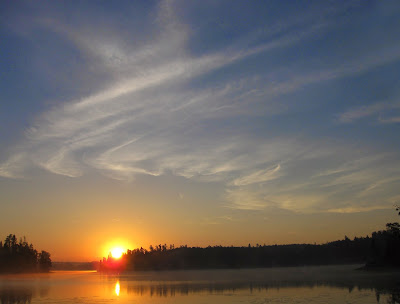 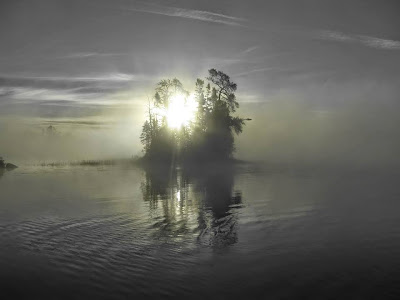 Into the dream and the distance
Of the marshes that southward lie,
With their lonely lagoons and rivers,
Far under the reeling sky.


Across the silences of night. 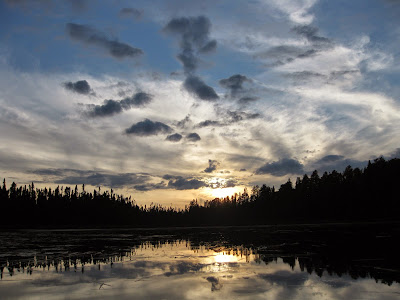 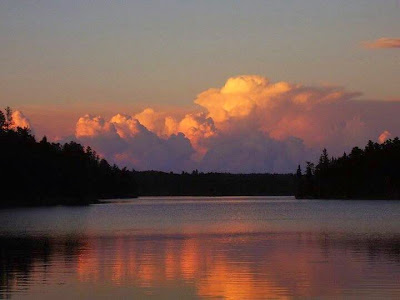 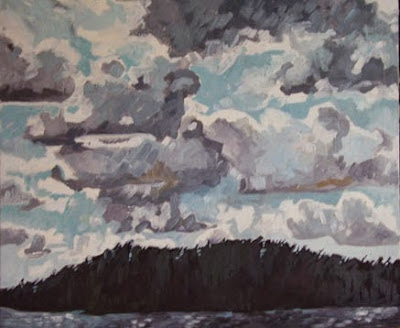 The sound of colors is so definite that it would be hard to find anyone who would express bright yellow with base notes, or dark lake with the treble.
Wassily Kandinsky 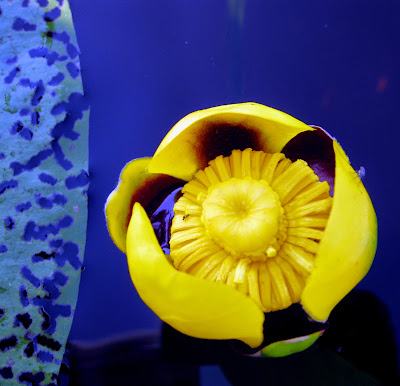 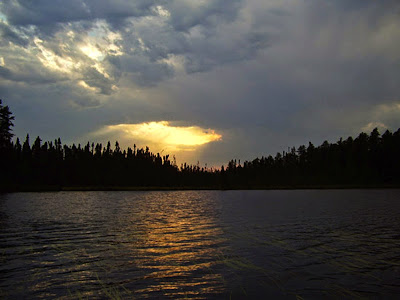 
I hear lake water lapping with low sounds by the shore. . . .
I hear it in the deep heart's core.”
William Butler Yates 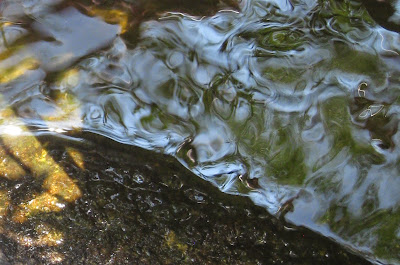 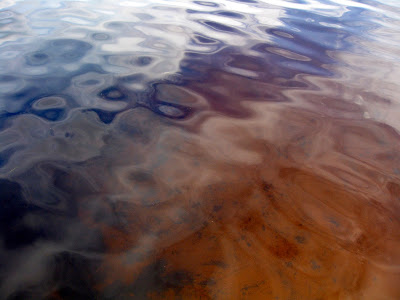 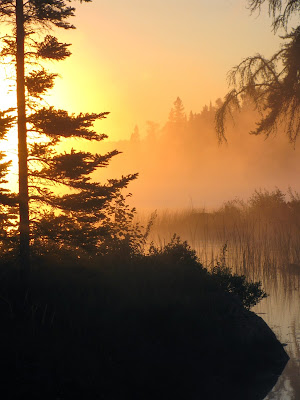 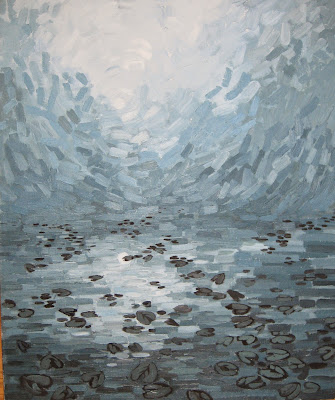 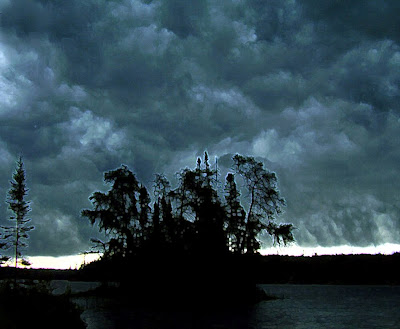 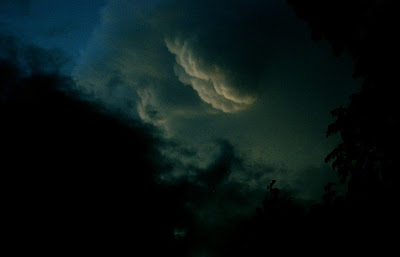