Weave a canopy above.... 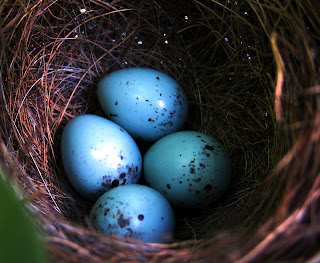 I have been reading Christina Rossetti's poems again. There is one called Winter Rain I love, and one passage in it really resonated with me last  night as I read it.

"Where the kind rain sinks
and sinks,
Green of Spring will follow.

Yet a lapse of weeks
Buds will burst their
edges,
Strip their wool coats, glue-
coats, streaks,
In the wood and hedges;

Weave a bower of love
For birds to meet each other,
Weave a canopy above
Nest and egg and mother."

I've just been checking this week to see if the tiny mother finch would come back to nest again in my hedge and there she was! But I will leave her in peace this year. I looked at the photos I took last spring in the bower of my own tightly canopied cotoneaster hedge. I worried over this spot for days, then missed the chance to see the final "flight" when I had to leave the city. When I came back the nest was empty. The finch was a wary little mother but I was able to take one shot of the four eggs and then, later, two very fast shots of the hatchlings, (three survived) so the little chicks asleep are a bit blurred. One is lying on his back sound alseep, the second crushed up beside him also asleep and the third is tucked there on the right with his wing over his sibling. I feel both tenderness and fear when I look at this photo. The nest itself was less than three inches across, so you can imagine how tiny these hatchlings were. Did they fly away? I hope they did. 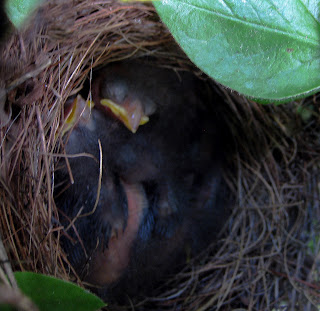 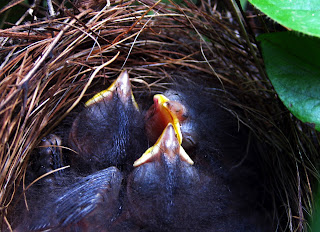 "But for the fattening rain
We should have no flowers
Never a bud or leaf again
But for soaking showers.