What is it about some houses that makes us uneasy? 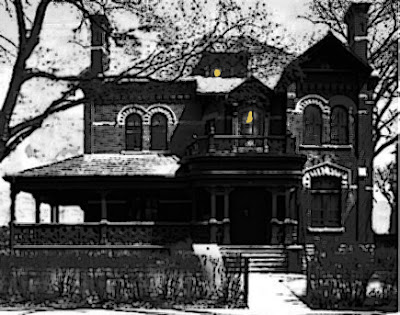 I was walking slowly past a particular house the other day (not the one above) - one that I often see on my now much shortened walks (a knee injury!) - and, once again, felt that deep inner recoil I always do whenever I'm near this place. I have no idea who lives there, but there is just something about its very presence that causes me to shrink from it with a feeling of uneasiness - almost dread.

When I  was researching My Mother's Ghost, my husband (of Scottish heritage) and I went into an old Alberta ranch house built in the late 19th C.  It was a typical ranch house of the time - a little worn around the edges, but it had been refurbished and set up in the 1980's as a guest ranch. We made it down the hall and into the kitchen and, there, my husband (whose grandmother was "fey" and who, himself,  has strong psychic connections at times) walked right out the back door and would not return to the house. He said to me he'd felt a heavy weight fall on his shoulders, and one section of the room was misted with a thick gray film.

The woman who owed and ran the guest ranch nodded when I asked her about the house - and said, very matter-of-factly, that the place had been haunted for years - and they had lost a number of workers because of it. Now this was ideal for my story about a family in grief who buy an old haunted ranch house! It felt like kismet. This place was perfect! But I also knew I wouldn't want to live there!

What is it about houses? Can they really hold the spirits of those who came before us? Can houses be sad for years on end, because of "things" that happened inside them?

Is it us? Can a human spirit in turmoil do this to bricks and mortar?

Or perhaps, when we recoil from a house, it is because we are affected by our own buried memories of something; something that has nothing whatsoever to do with a particular house.

Of course, abandoned houses can spook some people because they are empty, and crumbling, and have no one to look after them. They also remind each of us of our own fragile vulnerability in many ways as well.

I had encounters with two old and empty houses as a kid - and got caught with some friends exploring one of them. We were chased out by a man who seemed to appear out of nowhere, but it was clear he was no ghost! We scattered like rabbits. He didn't stand a chance of grabbing one of us! That house was old and empty, but not particularly scary. We just wanted to poke around in it. The other one was different. I'm keeping that story for another book one day ... :-)

But there are houses that seem to reek with something that repels some people. Why?

Of course, movies and books have often used typically Gothic-style houses to advance the idea of madness, horror, and fear. Like Norman Bates's house in Psycho, which was created to look like a house that simply had to be filled with insanity and crazy goings-on. Much like the rather bizarre and very real Alwyn Courts Apartments that Ira Levin chose for Rosemary's Baby.

But the house I walk past fairly often, is a perfectly ordinary early 1900's house. It's fairly well cared for. People live there. In summer there are rigid rows of marigolds in its front flower beds. Yet ... I'd be very hard-put to actually walk through the door of that house!

When I began to write The Warnings (originally called The Guardian Circle), I dug out a book from 1903, one that my husband's family had had for years - a large bound photo-filled book of black and white images used to promote Winnipeg businesses, banks and posh houses from that time. I looked for "my guardian circle house" in that book. Found a few that might suit, but none were exactly what I was looking for.

I did find it when I went to a local museum called Dalnavert (the house above) just by accident, really. Dalnavert is one of the finest examples of Queen Anne Revival architecture in Winnipeg, and is the restored home of Sir Hugh John Macdonald, who had it built in 1895. Hugh John was the son of Sir John A. Macdonald - one of our most famous Prime Ministers -  and was a lawyer who became Premier of Manitoba. When Hugh John died in 1929, his wife no longer wanted such a large house, and sold it. Their only son, John Alexander had, sadly, died of diabetes at nineteen years of age in 1905. We were told by our guide that the son died in the large attic area which had been used as a play room when he was young. Not sure if that's accurate, but it hit my creative bone with a tingle.

The house was sold and used as a rooming house for almost 40 years. It is believed to be haunted - of course! I decided the lay-out and look of the house, and its history as a long-time boarding house, were perfect for my needs. And the odd thing is, I didn't feel repelled by this old building at all, but did feel wonderfully immersed in Winnipeg history. 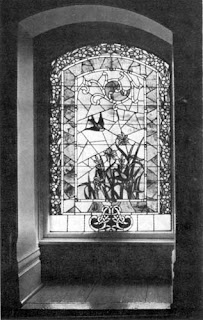 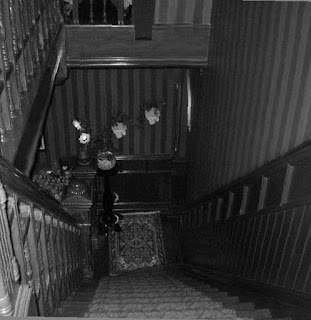 Writing about ghostly comings and goings is something that has always intrigued me; and houses, cottages and old stone buildings are often the settings I chose to use.﻿

But I'm still not going to ask to see inside that house I pass when I go for my walks!