"The quiet silver dark": Badger on the Barge, not just for young readers... 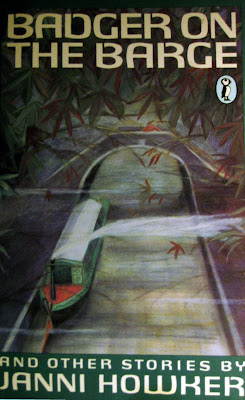 Photo taken of my old copy of Badger on the Barge - hence the warped look! But it's hard to find a copy of this cover even online - and the one I did find was too small.


Badger on the Barge, first published in 1984, is a timeless and riveting collection of stories by British writer Janni Howker. A writer that I feel did not get the attention she should have, after a short flurry of accolades in Britain ended. I often use these stories, which are categorized as writing for younger readers, as one example of the best of writing for any age. Here you will find writing that is layered, rich, and beautiful and stories that are deeply compelling.

Set in the north-west of England, the reader is introduced to a variety of memorable and solitary elderly characters and the young people they profoundly affect. There is the stubborn, rebellious Miss Brady who lives on a barge with a badger named Bad Bill; the reviled and misunderstood shepherd - a German prisoner named Reicker who remained in England after the war; the topiary gardener, Sally Beck, with the amazing past; the reclusive and haunted egg-man; and the old fisherman, Jakey.

Excerpts from the five stories in the collection, Badger on the Barge:


From Badger on the Barge:

The boat was long and low, and brightly painted. The hull was black, with green rubbing strakes and a red gunnel. The panels on the cabin sides were painted with roses - four flowers making a diamond shape. A striped red and green pole stuck out of the end. ... Helen saw that some of the paint was peeling and there was a heap of dirty straw on the small semi-circular poop deck.

---
Everything was quiet on the black water of the canal. The sun hung like a red balloon in the branches of the horse-chestnut tree. Only a swan came sailing, leaving a wake of ripples from under the bridge. It was white on the water, all alone.
"Here, Cobbler! Here, cob, cob, cob ... Here, Cobbler!" called a grand voice from the barge. "There's a good fellow. There's a grand lad!" It was an old voice. The barge rocked gently as someone moved inside.

---
The old woman's hair was grey and white in streaks, tied back in a bun. Her face was thin and dry as cardboard with deep lines round her nose and mouth. One leg was stretched stiffly in a bandage, her heel resting on a coil of rope. She was wearing a long brown skirt and a tweed jacket with leather patches on the elbows. She still held a slice of bread in her hand.
"Well, close the door."
Helen pulled it shut with a bang.
"Shhhh!" hissed Miss Brady.

---
There was a strange smell on the boat, strong and sour. On the floor were two saucers. One was full of milk and the other full of ...Helen looked again. It was full of raw liver and worms.

"Seig Heil! Sieg Heil!"
Arms outstretched in a black-line salute across the sun, mouths wide open, laughing, the two of them stood on the parapet of the bridge as the old man trudged by.
"Heil Hitler!" Sean yelled, and snapped his elbow stiff again.
"Here! I thought a German Shepherd was a kind of dog!" Martin shouted.
"Nazi! Nazi! Nazi!" They stamped the chant until they tumbled off the parapet, grinning like apes, and goose-marched up the hill behind old Reicker.
He turned on them, shaking his stick. "Go!" he barked. "Go away!"
"Woof-woof!" Martin barked back.
"Nazi! Nazi! Nazi!" Legs stiff, kicked up, the black line of their mocking salute, then a smart turn and they scattered back to the bridge whooping. The old man stood skylined on the crest of the moor road, a stick figure, solitary. Then he hurried out of view.

---
With swift black energy the shadows of the clouds began to skim up the fell. The air cooled. The background hum of insects seemed to grow louder until the bracken fizzed with it.

---
Reicker got to his feet. Sean beside him.
"Come," Reicker said. "Come, come." it sounded like "kom" the way he said it. He strode off up the deep slope, pointing with his stick. "Here. Up here. An old mine for shelter. Yes."
It was as if the rain was following a step behind them. It spattered on their shoulders and yet the sunlight and the air lay before them. Just as they saw the gaping hole of an old mine tunnel it caught up and they ran. The raindrops were as hard as hail, stinging and blinding. They lurched into the mouth of the shaft as the fell vanished in the torrent of the storm. The air in the shaft was dank and chilly, ferny and dripping with age.
Panting they both propped themselves against the rocky sides, as lightening jigged and hopped across the valley, closer and closer, until there was barely a gap for counting the thunder-miles across.
Blitzkrieg, thought Sean. The word just came into his head. Blitzkrieg. Lightening war.

Jane followed the egg-man over to the hedge. He stopped still, staring at something in the black twigs. It was Bridget's red ribbon - the one she had lost the day before.
"She's always picking flowers from the hedge," he whispered. "Losing her ribbons..." Carefully he untangled it. It lay across his palm as bright as blood. "Bought that ribbon at Whittackers on King Street, to go with her frock ... you know Whittackers on King Street?"
Jane nodded, but she didn't know at all. It was almost as if the egg-man was talking to himself.
"Pure China silk. From the Orient, this ribbon."
Jane stared at him. He was lying about the ribbon! It was Bridget's! But he did not seem to know he was lying. He believed himself.

---
"From Whittackers, you see. Clothes for the Discerning. This Season's Styles from London ... Only the best for my Nellen."
"Yes," whispered Jane.
The silence was like a grey cloud wrapping them both, as he held up the ribbon. The silence was like dust settling, and autumn leaves.

The river was silent. The marsh was grey and still, and without any sound at all save the lap-lapping of the waves as the tide crept up the muddy creeks.
Waiting for the boat made Steven lonely. He could hear the silence behind him in the trees of Freeman's Wood. He listened to the silence until he could hear it humming darkly amongst the wet black branches, and he began to be afraid.
"What if Rosa was lost at sea. What if Jakey could not find his way back in the mist. The darkness was coming on. Soon it would be all about him, and he would be alone in this silent place of marsh and river and silent trees.
He began to have the prickly feeling he was being watched. He glanced across the river, and his bones jumped under his skin. In the fading light, a small figure stood, still and watchful. It had two heads.


From The Topiary Garden:

The shadows crept together across the lane, until they were not shadows, but a blue darkness. The moon brightened.
Liz saw the white scut of a rabbit's tail as it hopped across the dewy grass. She held her breath to watch. The stillness over the countryside was like a very distant sound.
Suddenly the rabbit fled, zig-zagging back to the cover of the wall, startling her. An instant later, she heard the munch of footsteps on the stony lane.
A figure came over the slope, leaning on a stick, with the moon on its hunched shoulder.
Liz suddenly felt a long way from the caravan. She stayed very still.
"Evening, lass." It was voice of an old woman carrying through the quiet air.
"Hello," answered Liz with relief, as the stranger reached her.

---
Liz stared at her. It looked more like an old man who was standing there in the dark lane, thin and stooping and leaning on a stick, because the woman was wearing a long brown coat tied at the waist with a bit of rope, a pair of black wellies, and, on her head, a cloth cap, like the old men in Mill Street wore.
---
(Liz asks where the old woman lives)
The old woman walked very slowly, with her nose pointing at the ground and her shoulders up round her ears. "Aye. Down there. Yew Tree Cottage. Opposite topiary garden." Her voice was dry and rattling. "Sally Beck's the name."