Don't tell me the moon is shining....

Don't tell me the moon is shining: show me the glint of light on broken glass.
Anton Chekov
As a writer (and an artist) I have always "seen" the images I write about in my head - very clearly. Some writers have told me they don't see the things they are writing about in their mind's eye as they write. When I worked with novice writers, I talked about using their inner eye while writing, in order to describe in words any vibrant visual images they wanted to create in their stories. Many had no idea what I meant.


I would try to explain with this example. "When you go for a walk, look up a the sky and try to describe in words in your head what you are seeing. Do the lines of Canada geese flying over look like just a bunch of geese passing overhead? Or do they look like they are playing "crack the whip" in the ice-blue sky"?
As a writer and artist I am always looking, looking, looking. When I see something that pleases me, or catches my eyes, or shocks me visually, I try to write it in my mind the way I see it. I probably look a bit gormless at those times, but it works for me. I carry little notebooks to jot down images as well.
I think it’s important that we, as writers, use part of “writing time” to look, to examine, to study our  worlds - to help train that inner eye, so our writing will conjure up clear images in our readers’ minds.
It seems to me there is a very strong link between visual art and the art of writing. When Chekov wrote, "Don't tell me the moon is shining: show me the glint of light on broken glass." I believe he was telling writers to "see" -- to paint and sculpt and create vivid images in their minds as they write, not to simply state the facts by telling us what we must see. We have all heard the phrase “Show, not tell.”  He said it the best.
I decided to see if I could express this connection I feel between writing and “seeing” - by searching out artists and their paintings and pairing them with writers' quotes. I hope this brings Chekov's image of “show not tell” to life in an interesting way - using the expressions and descriptions and visions of the moon and moonlight by writers and painters. 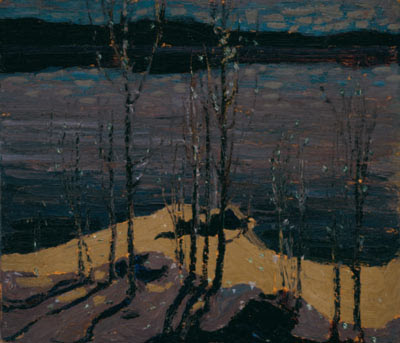 Tom Thomson "Moonlight and Birches"
Have you seen the bush by moonlight, from the train, go running by? Blackened log and stump and sapling, ghostly trees all dead and dry; Here a patch of glassy water; there a glimpse of mystic sky?
On the Night Train, Henry Lawson
"Moon" JMW Turner
The wind was a torrent of darkness among the gusty trees,
The moon was a ghostly galleon tossed upon cloudy seas,
The road was a ribbon of moonlight over the purple moor,
And the highwayman came riding—
Riding—riding—
The highwayman came riding,
up to the old inn-door.
The Highwayman, Alfred Noyes 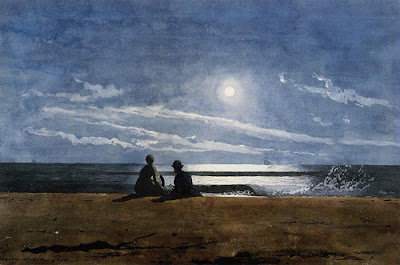 "Moonlight" Winslow Homer
How sweet the moonlight sleeps upon this bank!
Here we will sit and let the sounds of music
Creep in our ears: soft stillness and the night
Become the touches of sweet harmony.
Midsummer Night's Dream, Shakespeare 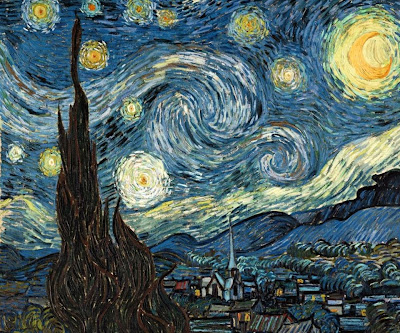 "The Starry Night", Vincent Van Gogh
Crazed through much child-bearing
The moon is staggering in the sky:
Moon-struck by the despairing
glances of her wandering eye
We grope, and grope in vain
For children born of her pain.
The Crazed Moon, William Butler Yeats 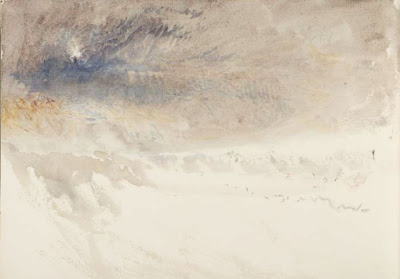 Dieppe Sketchbook
"Moonlight on the Sea"
JMW Turner
I sat by night beside a cold lake
And touched things smoother than moonlight on still water
But the moon in this cloud sea is not human
And there is no shore, no intimacy,
Only the start of space, the road to suns
Transcanada, F.R. Scott 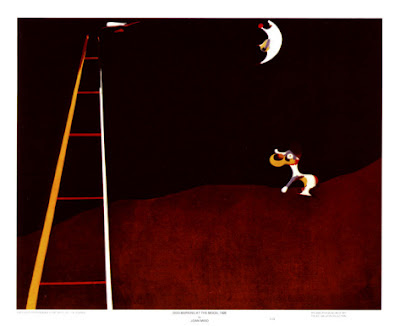 "Dog with Ladder", Joan Miro
The squalling cat and the squeaking mouse
The howling dog by the door of the house
The bat that lies in bed a t noon,
All love to be out by the light of the moon.
The Moon, Robert Louis Stevenson 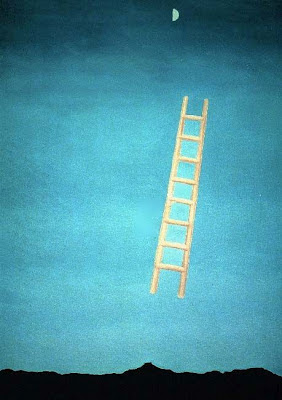 "Ladder to the Moon" Georgia O'Keefe (Inspired by Miro's painting)


That I could clamber to the frozen moon
And draw the ladder after me.
Arthur Schopenhauer, quoted from "Parerga and Paralipomena" 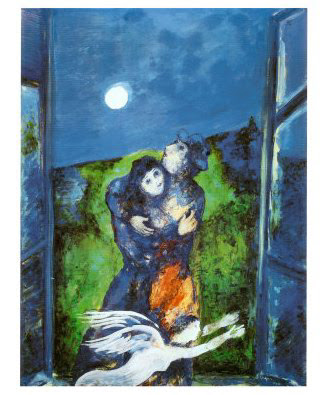 "Lovers in Moonlight" Marc Chagall
Two Lovers watched the new moon hold
The old moon in her tight embrace.
Said she: "There's mother, pale and old,
and drawing near her resting place."
Said he, "Be mine, and with me wed,"
Moon high she stared ... and shook her head.
Moon Song, Robert William Service 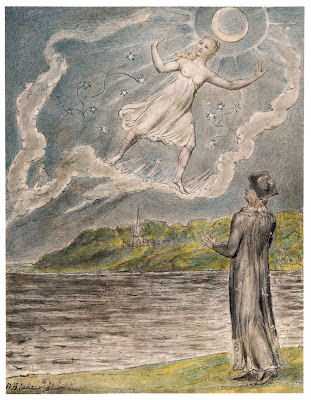 "The Wandering Moon" William Blake
The night walked down the sky with the moon in her hand.
A Memory, Frederic Lawrence Knowles 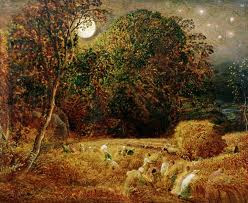 "Harvest Moon" Samuel Palmer
To lie on the bottom of the sky, like a gold doubloon.
The harvest moon has come,
Booming softly through heaven, like a bassoon.
And the earth replies all night, like a deep drum.

So people can't sleep,
So they go out where elms and oak trees keep
A kneeling vigil, in a religious hush.
The harvest moon has come!"The Harvest Moon" Ted Hughes 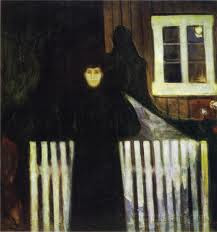 "Moonlight" Edvard Munch
And then as now you hung above those trees
illuminating all. But to my eyes
Your face seemed clouded, tremulous
From the tears that rose beneath my lids
So Painful was my life: and is, my
Dearest moon: its tenor does not change
And yet, memory and numbering of epochs
Of my grief is pleasing to me.
To the Moon, Giacomo Leopardi 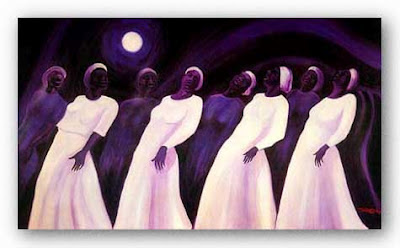 You did a marvelous job matching poems with paintings. I thoroughly enjoyed this. :)

Thanks so much, Susan. I had a lot of fun doing this. And I found some of the paintings seemed to fit in a really intense way with some of the writing. It was actually pretty exciting to experience this when it happened!

"As a writer (and an artist) I have always "seen" the images I write about in my head - very clearly." ... and that's why you are such a spectacular author...

What an absolutely wonderful thing to say, Karyn. Thank you so much.